400 hours to 400 Days blog party Guest Post: My Fantasy Obssession by ME!

It’s been like forever since I realized I had a deeply maybe even~clears throat~a little worrysome obsession with Fantasy YA books, sure there are tons and tons of YA books to choose from but in the end, who doesn’t like a really good dose of Faery along with some vamps in it right?
But just to make it clear Fantasy genre being my obsession doesn’t necessarily mean it’s my favorite. I just find it hilarious, enjoyable, and frankly? One of the best inventions in YA EVER!
So why, you ask is Alba ranting and ranting about Fantasy this day?

I just remember how when you’re a kid everything is possible you know, you wished to be whatever you wanted, if you said you would be an astronaut everyone said “Aww, sure you will,” or you said you wanted to be a princess, everyone said you would & COULD. Everything was possible and within reach just because of your imagination; but while you start growing up you realize that some things just aren’t meant to be true, and YA Fantasy is the ONE rule against it. 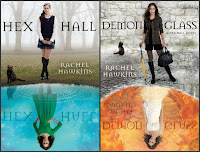 While reading a Fantasy, Urban Fantasy, or any Fantasy-related book you can once again believe that there’s a world, that not everyone knows of, where everything can happen, where there can be ghosts in plain sunlight, where vampires are good, faeries are bad things that don’t grant any wishes, that a kiss form prince charming will kill you instead of waking you up form a deep slumber, and so many more possibilities that you wouldn’t consider someone making that MUCH up in just one book, but that’s the magic and the trick of Fantasy there are simply  NO LIMITS.

So yes, I think that in some way if it wasn’t for Fantasy I wouldn’t be a reading/book addict today, and my life would simply be boring and resigned to the daily real-life story of the whole world.
I would love to give you a list of my favorite Fantasy books but it really has no ending. But HEY I can’t leave this post without sharing a bit right?

From Twilight, The Mortal Instruments, Hex Hall to Shiver, Hush-Hush, and Soul Screamers series I’ve pretty much met every fantasy creature that has existed.
Escape-that’s the word that pops in my head every time I think of reading a Fantasy book.
Can you just imagine it ~sits, reclines on chair, puts hands behind her head, stares off into space~ falling in love with the perfect guy, going on adventures just because! Being a heroine, rescuing your best friend, developing superpowers~lol~ So…now, can you see why I’m obsessed?

I’ve been reading my whole life but hadn’t been constant with it until I found YA Fantasy and haven’t stopped since then and still going strong.
That's it I think, my very first guest post!~phew~you have no idea how much I stressed about this. Hope you got to see a bit of what reading & fantasy combined have done to me.

So that's it for this stop on the Blog Party for 400 Days,
want to join in on the fun?