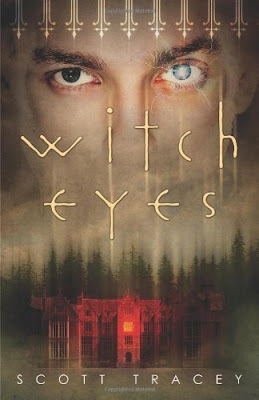 - Something wrenched itself in my stomach. Someone finally cared about me, and I didn't deserve it. -


Before I try to make this short and brief I have to ask forgiveness T-T I read this in October!!! OCTOBER and not until now I'm writing the review...so of course I had to go and skim the book again to be refreshed by it's completely DIFFERENT AMAZING AND SIMPLY GENIUS content!
I admit I thought I was going to be biased because Fiktshun liked it but THANK GOD I found my very own reason to love it 1. Scott Tracey's complete new concept of witch, of pov's and of, really, drama! 2. I'm in love with a guy who a) Is completely fictional(who of us isn't) b) Is or roots or goes or whatever you want to call it, for the other team T-T WHY oh WHY and c) the COVER of the book is awesome!


~Characters~
I'm in love with a guy whose eyes have a power I never even thought could be thought upon ;)
Braden his persona is completely likeable and sweet and shy and well he's strong lol and really naive in some parts but I love that he always goes after what he wants even if what he wants is the most dangerous thing for his life.
Trey, I have to admit I'm wary of him still. I really don't know why...at the beginning his personality really freaked me out. I do have to admit -hands down- to his kind of loyalty. It certainly doesn't exist anymore.
Drew, I'm in love again. I don't know why or how or when I just know this. He's my favourite character in the book. Maybe with like a 1% ahead of Braden. He is just so hilarious and straightforward and blunt it really is funny and doesn' backfire to him...much.

~ My heart wasn't content to leap into my throat: it slammed against my ribs, snapped my chest in half, punched a hole through my stomach, and nearly--- ~


~Plot~
AMAZING!
Captivating. I mean love and magic are so close to both their meanings is a wonder they're 2 different words. Scott's writing took me in like that ~snaps fingers~ I was lost in the story since the very beginning and really didn't want to let go. Braden's eyes are something to fear if you've done something bad, something to look forward if you're ready to be stripped to your very firsts...and something to be wary of if you're not sure you want someone to know much about yourself even though you want him/her to. I'm rambling so back to the plot. I love the thing that he has to wear dark glasses at all times >.< can't even begin to imagine all the hell he has to go through...in the end I was left just begging for more of the story that has 2 families willing to destroy each other and only Braden in the middle trying to convince them not to...


~My Feelings~
OMG this book was so hilarious it didn't seem real, every page I turned brought a new wave of smiles and heart wrenching sighs and tons and tons of laughter. I do admit I had to cry at at least 1 part right? I mean you know me I'm special like that. But after reading it I was left not with a frown but with a really huge sappy smile plastered on my face...a) because the whole book was genious and b) because the ending sure did torture not just me but Fiktshun as well LOL I love it when she can be teased like that...And it didn't want to go away long before the end...So I thank Scott for that too I really was able to scape to my happy place were only fictional characters exist ^_^

~Boys suck no matter where you live~


Special Thanks to Nat, if it weren't for you I wouldn't have this book in the first place! Thank you so much!