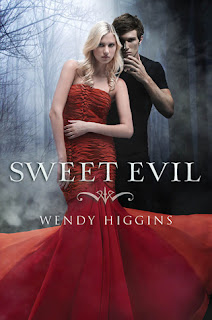 
Tenderhearted Southern girl Anna Whitt was born with the sixth sense to see and feel emotions of other people. She’s aware of a struggle within herself, an inexplicable pull toward danger, but Anna, the ultimate good girl, has always had the advantage of her angel side to balance the darkness within. It isn’t until she turns sixteen and meets the alluring Kaidan Rowe that she discovers her terrifying heritage and her willpower is put to the test. He’s the boy your daddy warned you about. If only someone had warned Anna.


The Characters/Scenery:
Anna is definitely the purest girl I've ever read about and she definitely lives up to her description... She can't lie, she doesn't like secrets, her feelings are always shown, she helps her mom, she loves her life, loves her best friend...
But even though she doesn't like secrets, she has a HUGE one, one she doesn't want or can't share even with her mom... And she's drawn to evil... Literally.
Anna's character is amazingly enjoyable and so very good! I really liked reading from her POV.

And Kaidan... I don't even want to try to explain to you what this guy, if he could even be called that, did to my insides. He took 'The New Evil is HOT' to a whole new level. If I'm guaranteed that if I were to turn evil HE would be mine, guys I'm so going to the dark side like that~blinks~ I think the girl who has fallen the hardest for him is IO! ME! YO! Seriously!!! Not even Anna or Ginger can compete with me!

And Jay, he is definitely awesome and I LOVE him to the death!!! He brought a kind of lightness, making all the difficult and heavy parts of the book endurable and enjoyable.

-Deflecting something from the outside was easier than capturing what was inside me and managing it.-


The Plot:
Having read quite a few angel books, I have to say, Sweet Evil is still so very very different than any other angel book out there, bringing in the fresh to new and old beliefs and stories revolving Heaven and Hell and I have to say that, what better source of info than the very Bible. Wendy Higgins I APPLAUD to you!!!
The author made the story feel as real as it could get, seriously. You cannot get any more serious and close to home than this!


Oh My Cloud! My Poor Feelings!
Jesus Clouds! You guys, if I'm alive is because it's physically impossible for a human to melt from sheer fictional character hotness!!
My favorite character was and is Kaidan! It just was, such a ride to read every single scene in which he took even the slightless part!
*I will never look at a freckle the same way again. NEVER IN MY LIFE!*

-I followed [character name] up the stairs, attempting to convince myself that having tea with a demon[...] was nothing to be scared about.-


My Weaknesses:
The tittle,
Oh my GOD! The tittle was in the book!!! It was literally mentioned. I was seriously doubting that it would happen because even though I think the tittle goes really well with the whole story, I still didn't see any break in the dialogue or the general story-writing in which it could be said but oh my CLOUDS! Guys be  ready! When you least expect it... BOOM! Sweet Evil! So, tittle in the book as it is on it.
The cover,
I have to admit at first I wasn't such a huge fan of the cover because of the girl's dress. I don't know what got into me that first time but later on I got a REALLY good look at it, and the bright side vs. the dark side? PERFECTION! You'll see the meaning of it throughout the whole reading!

-This guy was sexy like it was his job or something.-


An amazing fresh take on the classic Angels/Demons stories, filled of addictive yummyness and dangerous pleasures. Believe me when I tell you, when you read this book giving into temptation will seem like the most awesome thing you could ever do and you'll wonder why you hadn't done so before!

I give this book: