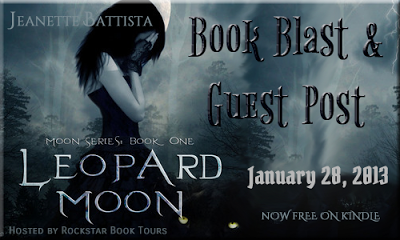 To help spread the word about the fact that Jeanette Battista's LEOPARD MOON, the first book in the Moon series, is available for free at Amazon for the Kindle until the end of the month we've invited the author to the blog to share a guest post about her experience writing the book.

To check out all the books in the series on Goodreads, CLICK HERE.

The guest post follows below, but first here's some information about the awesome book and author and places you can find them both online! 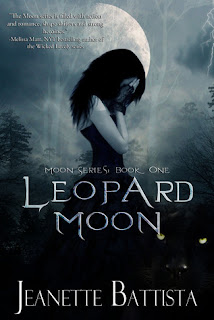 *** How do you disappear when you come from a family of predators?

A wereleopard, Kess is forced to flee her home and family in Miami once her brother's obsession with her turns violent. She runs from city to city, trying to stay one step ahead of the investigators her family has dispatched to bring her home. Kess ends up in the mountains of North Carolina and attracts the attention of Cormac, a young man with a secret of his own. As she attempts to live as normal a life as her were-nature allows, her brother Sek continues to hunt for her. He believes she is the key to revitalizing their weakened clan and is driven to extreme measures to ensure their continued existence. As Kess' relationship with Cormac deepens, Sek closes in, threatening Cormac's life and Kess' freedom.


Jeanette Battista graduated with an English degree with a concentration in medieval literature which explains her possibly unhealthy fixation on edged weapons and cathedral architecture. She spent a summer in England and Scotland studying the historical King Arthur, which did nothing to curb her obsession. To satisfy her adrenaline cravings—since sword fighting is not widely accepted in these modern times—she rode a motorcycle at ridiculously high speeds, got some tattoos, and took kickboxing and boxing classes. She gave up the bike when her daughter came along, although she still gets pummeled at the gym on a regular basis.

When she’s not writing or working, Jeanette spends time with family, hikes, reads, makes decadent brownies, buys killer boots, and plays Pocket Frogs. She wishes there were more hours in the day so she could actually do more of these things. She lives with her daughter and their ancient, ill-tempered cat in North Carolina.

*** I'll be honest--I wasn't planning to write a book like Leopard Moon. I had an entirely different story in my head at the time, but it just wasn't coming into clear focus. That's the funny way writing works though: there I am, sitting at a red light on my way to meet my friends for a birthday martini and pedicure, listening to Florence + the Machine and WHAM! The song Howl comes on and this whole lovely scene just starts unfolding in my head. There was Kess, running through the woods, ripping off of her clothes as she triggered a change into a black leopard. And there was Cormac, standing in a different part of the woods being beaten mercilessly by the villain. I didn't know Sek was going to turn out to be Kess' brother, but I did know who he was as a character and what he wanted.

It was truly a gift: the entire final fight scene just unspooled itself along with the song lyrics. Each beat of the song matched a key point in the fight. The more I listened, the more I realized that the lyrics could apply to all of the characters in the main triangle at some point in the story I suddenly wanted to tell. And I wanted that story to be more than just boy meeting girl--I wanted that story to be about girl saving boy, but more importantly about girl saving herself. The song Howl gave me Kess first and Sekhmet second, so a lot of what I tried to do with them was to show them as two halves of a whole, two sides of a coin. Howl, at least to me, wasn't a love song at all--it was a song about possession and obsession and all of those things that show up in our animal drives. that we'd like to forget exists.

So when I began to craft Kess and Sek, Howl played on a continuous loop. And though the song speaks of wolves, I knew these two had to be cats. Wolves have a more social nature and are more easily understood by us--I think it comes from them being a a precursor to our beloved dogs. Cats are an unknown quantity, strange and separate, even if they choose to share space with us. I wanted real darkness there, not just a brief bit of danger that would be easily resolved. Obsession and mental illness gave Sek that scariness, but also--I hope--a bit of sympathy. He really does love his sister and wants what is best for her and his clan. I never intended to excuse his behavior, but I did want to try and understand it.

Just like the song made me understand that narrator of that story. I can only hope I did half so well. ***


***
To meet Kess, Cormac and Sek in this first book in the Moon series, head over to Amazon to download the Kindle eBook for free until January 31st.


It can be found HERE!

Ahhh!!
I'm so excited now!!!
I admit to have seen the cover of the book here and there (Which is definitely DEFINITELY Cover Obsession material *O* ) but never really found out what the book was all about...
Now I shall get it!!
So if you'll excuse me I'll grab it while it's free on AMAZON!! :D
-links are above ;)-

Thanks to the Rockstar Book Tours hosts for adding yet ANOTHER book to my TBR pile -_-
-heavy sarcasm.-