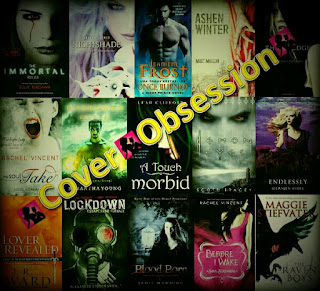 Cover Obsession is a feature here on BookPics.
-I really don't know if anyone else does it as I do but I'm not trying to steal any other ideas out there-
In which I tell you what new book covers I'm completely in love with, pinning for, drooling over, tearing-up over, going all OH CLOUD! on and all the other AMAZING-FANTASTIC-AWESOME-BOOKPIC-LY verbs and adjectives and adverbs you can think of that just simply aren't enough to describe how I feel towards said covers so,
I just go ahead and OBSESS over them :D
----------------------------------------

So, today while still sharing with you my obsession... I have one and one book cover only...

That I really think it deserves to be admired all on its own...

It's so creepy and beautiful and drawing and just... So gorgeous!

I still haven't read the second book but seriously... With THIS cover...

I don't even know what the clouds I am waiting for!!! The Retribution of Mara Dyer by Michelle Hodkin

I also have another book cover to share with you that while still great what makes it special, to me, is the content that'll have when it releases!!

I've been a fan of the author's books for such a long time and I've been struggling with the fact that the previous trilogy has already come to an end but I have yet to read said ending...
Anyway...
Just LOOK at what THIS MEANS!

Fifteen-year-old Izzy Brannick was trained to fight monsters. For centuries, her family has hunted magical creatures. But when Izzy’s older sister vanishes without a trace while on a job, Izzy's mom decides they need to take a break.

Izzy and her mom move to a new town, but they soon discover it’s not as normal as it appears. A series of hauntings has been plaguing the local high school, and Izzy is determined to prove her worth and investigate. But assuming the guise of an average teenager is easier said than done. For a tough girl who's always been on her own, it’s strange to suddenly make friends and maybe even have a crush.

Can Izzy trust her new friends to help find the secret behind the hauntings before more people get hurt?

Any book cover you are currently obsessed with?
Share 'em!