Welcome, BookPicERS! To my stop on the First Visions blog tour!!
I'm incredibly excited to be sharing with you my thoughts on the book as well as a giveaway!!
Seriously! I'm very very glad I signed up for this... I'm finding new talented authors to love and new stories to keep up with!
Want to know why?
Let us get to know the book, my review and the author then.
(Don't forget to drop by the other blog tour stops as well! Just go HERE.) *** Two years ago, 21-year-old Kate Edwards became deathly ill and slipped into a coma. While unconscious, she crept into the mind of a missing boy and awoke with the knowledge of his location. Friends and family were skeptical and wary of her new ability to see into the minds of others. Their fears prompted Kate to keep her psychic powers a secret. Feeling alienated, she dropped out of college and spent most of her days holed up at her mother's home.

Now another child has been abducted. Police detective Jared Corbett seeks out Kate for her help in solving the case. Reluctantly, Kate agrees and they must work together to bring 8-year-old Cori Preston home to her family. Although attracted to one another, Jared has a girlfriend with ties to the abduction case and Kate is sarcastic and guarded since her coma. With visions she can't control and an uncontrollable attraction to the detective, she wonders if she can leave the past behind and finally stop hiding from the world. Otherwise, Cori may be lost forever. ***

Get the book!
Amazon
Barnes & Noble
The Book Depository 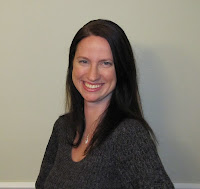 
Heather Topham Wood’s obsession with novels began in childhood while growing up in a shore town in New Jersey. Writing since her teens, she recently returned to penning novels after a successful career as a freelance writer. In 2012, she published the first two novels in her Second Sight series: First Visions and New Revelations.
Heather graduated from the College of New Jersey in 2005 and holds a bachelor's degree in English. Her freelance work has appeared in publications such as USA Today, Livestrong.com, Outlook by the Bay and Step in Style magazine. She resides in Trenton, New Jersey with her husband and two sons. Besides writing, Heather is a pop culture fanatic and has an obsession with supernatural novels and TV shows.

Once again I've been wow'ed by a book I had good hopes for but never thought to like as much as I did.

From page one I was immediately drawn to the main character, Kate. I instantly wanted to get to know her. And her story. I wanted to know just what exactly was this 'gift' of hers... And how she came to it, how she dealt with it...
Not only was I drawn to the main character but all the others as well. Plus, Jared... What IS IT about men named Jared? First of all, AMAZING name choice, then of course... He HAD to be hot, hot, with ethics, and well... Hot.

Seriously though. Kate, as the author wrote her, is incredibly likable, so easygoing but also with her feet on the ground and sentimental. I couldn't help but laugh almost every single time she spoke on the first half of the book... Jared SO helped with that. She has a good heart, she is terrified... While Jared is anything but.


-"... My visions are usually horrible, I only wanted to share with you that you gave me one of the best ones I ever had."

Jared took my breath away... Lately it's becoming REALLY really hard to find love interests [specially men/boys] in books that aren't snarky or the "Bad Guy" or dark or brooding -though I'm ALL for them- it was really refreshing to actually fall for a normal nice guy that had the looks going for him. Also, the fact that he is incredibly stubborn when it comes to helping others didn't hurt at all.

Kate's mom, Darlene, takes on a really huge roll on the story, that while secondary still so very very important and I loved the fact that her character developed throughout the story just as all the others did.

I'm actually quite surprised at all the feelings that Jared's girlfriend inspired in me... O_O I'm known for loving almost all the characters in a book I enjoy... Even the bad ones since... well, they play their part well... But there was something about this girl... Made me want to... Nope... Not going there.


-"Your girlfriend--she's beautiful. What's she doing slumming with you?"-

I enjoyed the multiple point of views that the author went for with her story, though at the beginning I was a bit wary... That melted away when I saw how easy it was for me to keep up thanks to the author's writing talent :D I'm not a huge fan of multiple POVs but boy... Was I excited for this one.

Sadly, my weaknesses kind of weren't found, at least not by me. I'm not such a huge fan of the cover nor do I know how it relates to the whole story... If I were to find this book in the shelves of a bookstore I would immediately think "Middle grade"or "Kids reads" not "New Adult" nope, definitely NOT that. And while the tittle does give a hint at a paranormal element it wasn't in the book at all... Second sight or other terms were used but never 'first'.

And the paranormal/fantasy, whatever call it whatever you want, element blended amazing! It gave exactly the spice that this story needed.

A girl with a second sight, a missing girl, a hot cop/detective/crush, a crumbling mind, a lonely past, an even lonelier present, and an impossible love.
Dark, light, thrilling, exciting, funny, sarcastic, and oh so very very fresh.


-"Are you paying? Because this affects what I'll be ordering."-

I completely recommend it if you have a few hours to spare, it's a quick read, trust me.

(Review based on a copy provided by the author in exchange of my honest review.)

-BookPics is not hosting this giveaway.-