-Book Blast, Spotlight + Giveaway- Over The Rainbow by Brian Rowe

Welcome to Over The Rainbow book blitz :D You'll get to know all about the book, the author, and enter a giveaway ;)
Sound good? 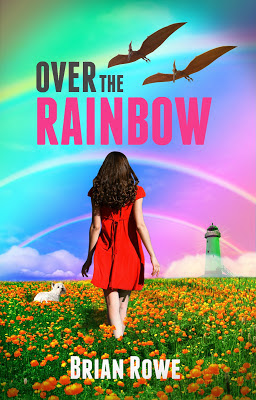 
Zippy Green never meant to fall in love with a girl, but when she does, her ultra-conservative father tries to send her to anti-gay camp. At the Kansas City airport, however, she hides inside a giant suitcase and sneaks onto an airplane headed not to the camp, but to Seattle, where her online love Mira lives. Halfway through the flight, the plane barrels out of control and crashes into the ground, knocking her unconscious.

When Zippy awakens, she finds that most of the passengers have vanished. She doesn’t know what’s happened, but she’s determined to find out. She begins a quest on foot toward Seattle, and along the way, she meets a teenager with a concussion a homeless man with a heart condition, a child without a shred of bravery, and a terrier named Judy. Together the group discovers that more than two-thirds of the world’s population has mysteriously disappeared. But that’s only the beginning…

All Zippy wants is to find her Mira, but before she can she has to contend with two outside forces. The first is her homophobic father, who does everything in his power to keep her from the girl she loves. And the second is extinct creatures of all shapes and sizes, including living, breathing dinosaurs, which have replaced the missing population.

Brian Rowe is a writing fiend, book devotee, film fanatic, and constant dreamer. He’s written nine novels, dozens of short stories, five feature-length screenplays, and hundreds of film articles and essays. He is one half of the blog Story Carnivores, where he reviews the latest in books and film. He is currently pursuing his MA in English at the University of Nevada, Reno, and is hard at work on his next novel.

-Giveaway is International
-Giveaway not hosted by BookPics