-review- This Is War Baby by K. Webster 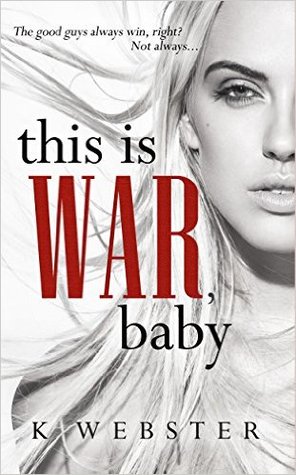 "Because the queen always protects the king." And then she whispers the last part. "Even from himself."


I've never been happier about the fact that I rarely read newly released books as I am right now.
But boy am I happy.
I love the name of the series.
I love the name of him and her.
I love and hate everything right now and I'm so incredibly ready to know what in the world will happen in the end. As in the end of the series!
This is a really dark book at the beginning that turns a bit brighter as the story progresses but only a little brighter.
There's a lot of scenes that happen that can potentially trigger some episodes so beware of it.
A lot of physical and psychological abuse.
A lot of mental illness involved.
But aside from that. I am really shocked at how much I liked this book. I thoroughly enjoyed it.
From the writing, even if there are some typos and editing errors here and there, to how the story flowed and you never really knew what would actually happen next.

Bay is a 17yo and she sure sounds like it when I read the parts that are told from her POV but you see how she grows and matures, admittedly she's made to, but she definitely isn't 17 by the end of the book nor is she a helpless little teen crying about her boyfriend.
Gabe is a sick mother of clouds. Nothing more left to say.
And Warren is a really broken soul with an amazing heart. I ached for him. I wanted to make him feel better. I wanted to reach into the book and take his pain away.

Also, not even halfway through and BOOM! the book tittle was IN the book as much as it was on it so cookie points for that!

Peace and War have stolen my heart and now I won't stop until I get to the end of this story!
Wish me luck!!!!

"She's the sun, water, and earth. And I'm a seed that has hope to grow into something strong and beautiful. Because of her."

My life had a plan. Until he invaded it and stole it all away. My captor took me and I became a pawn.
His strategy changed and he sent me away to WAR, because money is everything in this world.
In my WAR, though, I found peace.
I couldn’t help but find love where I least expected it, with a man who lived a battle every day of his life
…all inside his head.
But then my captor came back for me.
Yet, this time, battle lines had been drawn and I was protected.
So we thought.
Even though my WAR was raging,
my captor would fight to the death.
The good guys always win, right?
Not always.
All’s fair in love and WAR, right?
Not this time.
***WARNING***
This is War, Baby is a dark romance. A really dark one. So dark you’re going to wish you had a flashlight to see yourself to the end and someone to hold your hand. Human trafficking, dubious consent, and strong sexual themes that could trigger emotional distress are found in this story. This story is NOT for everyone.
book description book review bookpics dark romance erotica k. webster review romance starred review this is war baby