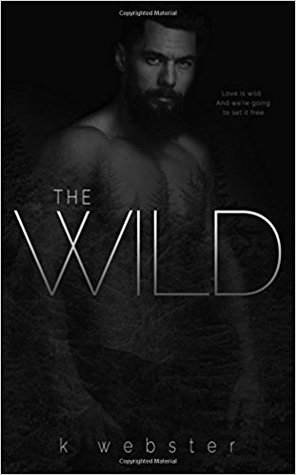 FYI
It was an adventure trying to get this book.

I love reading, I love reading sexy times and I rarely shy away from dark romances with rough sexy times.
What I rarely read are books that stretch the limits of my comfort zone until I am not even sure those limits are within sight.

The Wild by K. Webster was one of those books. It was good it was bad and it was a complete guilty pleasure of a read if only because I'd already been a fan of the author's writing long before I found out about this book, my awesome friend April from the blog Rad Babes Read brought it to my attention and well... the rest is history.

- Nipping and sucking. Desperation in a kiss.-


This book isn't for everyone, I got that I respected that just as I hoped people would respect it but apparently that was asking for too much.

But worry not, it's good in a twisted kind of way that'll leave you asking yourself if you've morals at all at some point, while panting and getting all hot and bothered at others because damn... this author and the sexy times O_O LMAO

While I wasn't a fan of the male leading character if only because most of the times he didn't act his age, what could I ask of people living away from civilization?

I liked the female leading girl more if only because she was more true to herself since the beginning, no lies, no half-assed thoughts or actions, she always went all in.

-He looks up at me, blood running down the back of his hand from the rabbit and grins before nodding. Out here in the wilderness, with snow as our backdrop and him looking positively feral as he skins the game, I feel my heart rate quicken.-

Expect humans reaching their lowest and highest in the middle of nature and trying to cope with what that nature might be.