As you can see, the Hollowed blog tour stops today by the blog!!!
~Insert me screaming of excitement~

And I'm freaking out because...
The VERY Kelley York -gasps- is dropping by to answer my question attack some questions!!

I've told you before, I fell in love with her writing ever since I read her contemporary book, Hushed-review-last year. She captivated me in a way I didn't think possible.

Now, she's expanding her audience with this new book! Fantasy, Paranormal, call it what you like.
Hollowed is not only dark-oh yeap, I've started it already. Trust me, you don't want to miss reading it.-but fun AND exciting.

But enough of my ramblings, let's get to the mwahahahaha um, query, I mean,

Thanks Kelley SO very much for the opportunity to take part on the blog tour!
Seriously, you have NO, Zero, NO NO NO, NIENTE, NADA, NO idea of how starstruck I've been... Ever since I participated on the Cover Reveal for Hollowed... And now... This?
My happiness knows NO boundaries.

BP: First of all, thank you so very very much for this!
*-* I've told you before that ever since I read Hushed I was destined to stalk you-online of course.- And you were doomed to have a stalker ^____^
Anyway, I know most people start author interviews with things like 'tell us a bit about you' or something between those lines but... Let's make it interesting.

BP: Going a bit more serious here, when did you first started to consider yourself as a writer?
I've always considered myself a writer, because I've always written. I wrote primarily fan fiction for many, many years, and very slowly inched my way into original work. I didn't consider myself an author until I'd completely my first book, though!

BP: Could you tell is in 10 words or less, what Hollowed is about?
A newly-turned vampire adjusts to life while uncovering the lies in her past.
Man, that's hard. And terrible!
BP: [No it's not, hahaha I like it actually.]

BP: What was the hardest part of writing the book? The easiest? The funniest?
The hardest part was probably the romance. Because I love Briar and Noah, I wanted to make everything sunshine and rainbows for them, but that wouldn't have made a very interesting story. Sometimes it was hard to put them in situations that would hurt htem.
The easiest part was probably Briar herself. She's a very easy narrator to write for. The funniest—Fred. The scene with him and Briar in her hotel room.
BP: [I haven't gotten to that part yet T_T you're teasing me!]

BP:  Asking about your writing in general here. Has there ever been a time that you've cried while writing a scene for a book? Were they happy or sad tears?
I've cried while writing before, yes. They were always sad tears. I don't recall if I did while writing Hollowed, but I know I did in the original draft of the second book—Shadow Voices. I also cried once or twice writing Hushed, because Archer was such an emotionally damaged character. When he was hurt, and I was conveying that hurt, I could feel it.
BP: [Don't remind me please! I was such a mess. Archer-sighs-he's one of my favorite characters EVER!]

BP: Do you have any favorite author right now? Has she/he always been your favorite?
I have several! Hannah Moskowitz is one of my long-standing faves. George R.R. Martin is another, though admittedly, I haven't read anything other than his A Song of Ice and Fire series. I've only read Isaac Marion's one book, but I absolutely loved it and will read anything else he ever does.
BP: [I'm so happy I know at least one of your faves!!!]

BP: What's your least favorite genre of book to read?
Probably science fiction or dystopians. I'm not a fan of either.
BP: [High fives* Science Fiction is one of my least, only second to Historical. Though, I actually like dystopia :D]

BP: If someone wrote a book about you, what would the tittle be? Why?
Haha. It'd be something like, "The Girl who Never Grew Up." Because I haven't. I'm still a big kid at heart who loves cartoons and video games and fandoms, and I consider the muses in my head to be like best friends because I know them so well.
BP: [As if I needed any more reasons to love you]

BP: If a movie was made about your life, what Hollywood star would you get to play the lead role?
About MY life? Man, I don't know. No one in Hollywood looks like me. It'd have to be someone really goofy and socially stunted. Like a female version of Michael Cera.

BP: Have any work in progress right now you could share something about? ^_^  Or is it top secret?
Several! I'm working on the second book in the Half Light Saga, Shadow Voices. I'm also doing revisions on a completed LGBT contemporary story, and I have another contemporary called Dirty London that I recently started. I'm a busy girl.
BP: [Busy indeed. I can't wait for your next contemporary. I admit it. I'm a KelleyYorkAddict. Dirty London?? O____O]

BP: Okay... If you were to be an animal... what animal would you choose to be?
Ooh, a snow leopard. Or a wolf. I love them both so much.

BP: Early riser or Night owl?
Night owl.
(Though I will say, during the winter some of my favorite moments are waking up around 5am, unable to sleep, and listening to the rain in the dark.)
BP: [Gasps, really? During winter? O_O Um, I might try it.] 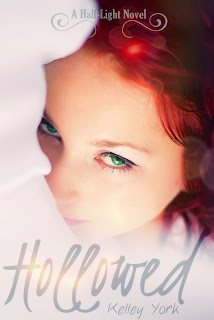 All 18-year-old Briar Greyson wanted was to figure out this whole living-away-from-your-parents thing. Apartment, steady job, cool roommate? Check. Noah, her adorable (albeit elusive) boyfriend? Check. Everything in the life of Briar was pretty good.

Then she and her roommate are attacked on their way home one night. Briar wasn't supposed to survive.

Instead, according to the two guys who saved her, she's turning into the things that attacked her: a vampire. Totally crazy and Not Okay. Now Noah's secrets are coming to light, and he wants Briar dead. Then there are the vampires who attacked Briar to lure out her sister.

Her sister...who died years ago.

The city's body count is rising, and Briar wants to help put a stop to it. But first, she has to figure out who the real enemy is: the vampires, the boy she loves, or the sister she thought she'd lost.